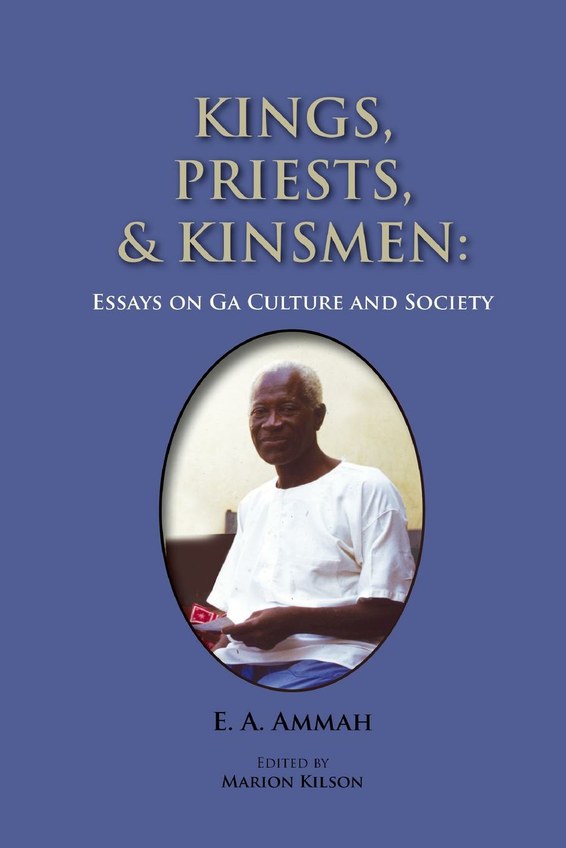 Book Review: Kings, Priests, and Kinsmen: Essays on Ga Culture and Society, by E. A. Ammah, edited by Marion Kilson (Accra: Sub-Saharan Publishers, 2016).
By Gyau Kumi Adu joewykay55@gmail.com
The thesis of the book is to inform readers about the Ga culture and society in general covering the time of the beginning of the Ga culture and ends at the turn of the 20th century. It uses an interdisciplinary-approach[1] of Ga philosophy, theology, politics, linguistics, religion, history and sociology. One significant theme running through all these essays is that the African culture is very rich, for that matter the Ga culture, in a wide range of subjects (as mentioned earlier).
Pertaining to how rich the Ga culture is in philosophy Ammah writes: “In the Ga Bible, wisdom is translated as nilee (knowledge of all things). But in kple, we have Oleete for wisdom. When used as Teteoleete, it means “the man who dwells in appearance and show of sense,” as Plato remarked long ago.”[2]
Concerning the depths of the Ga culture in sociology Ammah notes: ‘The sense of Ga community is built on the concrete foundation of… May our brooms be “thick,” may we obtain bestowable things to bestow on it, may it work for us that we may enjoy.…  It can be readily seen from this that the question of the group and that of the individual is not a problem in the Ga society.’[3]
In my view the book meets its main objective by covering these areas. It is a very classical book which will endure for many generations to come. It is very revealing. It covers many important subjects that the youth of Ghana are not privy to. One reason is that many Ga writings are difficult to come by. Some significant writings are also out of print.

I am a sincere, self-motivated, versatile and creative young gentleman, who has extensive knowledge in philosophy and religion, particularly in relation to the African experience. I aspire to use my knowledge and academic experience to assist in developing and shaping the continent of Africa, and for that matter Ghana, through my writings on the Ga culture, Biblical doctrine, and other practical issues in life.

[1] I use this not in the technical sense of the word where the author intentionally relates more than one branch of knowledge at a time to present truth in a very broad perspective. However, although the author does not apparently use this approach, his mastery of the all these subjects (as mentioned in the write up) inherently employs this approach, especially when the broad is read as one collection rather than in pieces as a set of essays. In fact the author does not just use local sources but foreign sources as well to establish truth or cogent arguments.
[2]Pp 24.
[3]Pp 97
[4]Pp 222.
[5] Did some research on this by asking some natives.
[6] Although this information is sensitive and could have been said in a way to not sound political but informative for the future youth of the country to be acquainted with facts.
[7]Pp18.
[8]Pp18.
[9][9] Joseph Abekar Mensah, Traditions and Customs of Gadamgmes of Ghana: Descendants of Authentic Biblical Hebrew Israelites (Houston: Strategic Book Publishing and Rights Co., 2013), 339.
[10] See footnote 14, pp 150.
[11] Ephesians 5:24-25.
[12] 153.
[13] Osman Alhassan, Traditional Authorities and Sustainable Development: Chiefs and Resource Management in Ghana,” in Chieftaincy in Ghana: Culture, Governance and development,” ed. Irene K. Odotei and Albert K. Awedoba (Accra: Sub-Saharan Publishers, 2006), 528.
[14] 216.
[15] 376 and 378.

PrevPreviousA Tribute the late Dr. Vincent Padi from GaDangme Foundation UK.
NextI am not a Cow&Gate baby: I was naturally nurturedNext

No Homowo in London this year, we are shielding from Corocoro

Ade Sawyerr Management consultant, community activist, cultural enthusiast and social, economic and political commentator in search of community integration in Britain and African development. Ade can be contacted at equinoxconsulting.net or adesawyerr@gmail.com.
SIGN UP

The Matters Arising blog is a collection of thought-provoking, thought-leadership pieces sprinkled with some blue-sky thinking on pertinent issues affecting African communities both in the diaspora and at home. It includes articles on culture, politics, social and economic advancement, diversity and inclusion, community cohesion topics. It is also a repository of the political history of Ghana, traditions of the Gadagme people of Ghana, and the Pan-African politics of Kwame Nkrumah. Read, enjoy, like, share, and join!