This lecture was delivered under the auspices of Gadangme Nikasemo Asafo in London by Reverend G. Nii Noi Odonkor, Chairperson  of the Ga Presbytery on 18th October 2014 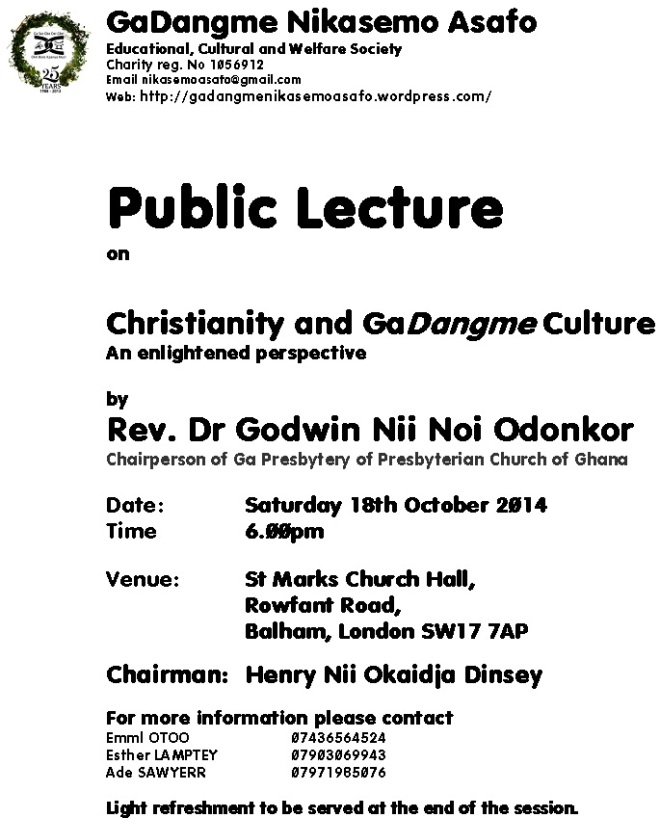 Introduction:
Thank you so much for the invitation to share some ideas on culture and Christianity with you. For starters I want to admit that the topic is a bit broad and so narrowing it should be the way out. Culture is a way of life of a people and religion is one of the pillars of culture of a people. Since the context is that of GaDangme I will narrow the reference to Ga Culture. The Christian faith may have its different strands but I will be making general references to it.
Topic:
For me the topic is an attempt at reflecting on –Being African (Ga) and Christian at one and the same time.
How can we be truthfully Ga Christians? To answer this I think we should be guided by two verses in the New Testament:

I am sure God is posing this same question to all people at every turn of life and He expects an answer from all, the English, Americans, Japanese, Hausas, Scots, Ewe, Ga, etc.
Obviously, because of our common humanity there are things that we share with all the people but there are many things that are unique to each group. It is only by bringing our unique experiences of God together that we are able, to some extent, to appreciate what God is like?

Who is God to the Ga and how do we reckon our identity vis-a-vis our understanding of God?

The Ga of Ghana
As mentioned earlier on, as Ga we share a lot with other cultural people in Ghana and perhaps outside Ghana. But we are unique because we have things that mark us out as Ga. Homowo celebration is one such uniqueness, language and many Ga names are others. In our uniqueness, who do we say God is? Or Jesus Christ is?
What do we as Ga, share with Christianity and where do we differ from Christian position?
Some concepts that are Common to both Ga and Christianity–

Christianity has her Saints; persons who have lived in demonstration of their faith, Catholics- accept Sainthood through canonization, Protestants understanding is Pauline, i.e. every true Christian is a Saint. As far as Christianity goes, the Bible does not make reference to relationships with the dead. An exemption is e.g. Saul and the witch of Endor. Christians however believe in the Communion of Saints (that they share in our lives); we celebrate all Souls Day and all Saints Day, Many Protestants do not pray for Saints. ???
Jesus as the first ancestor. Jesus unites peoples of all cultures. He is thus a unique ancestor, the elder-brother ancestor and the Number One of all the ancestors; Ancestor par excellence. This is why He is the most important being in our lives.
The truth is God reveals Himself to people at various times. Often our vision of this God is blurred. But it is Jesus who has come to un-blur our vision of God; hence the uniqueness of Jesus. 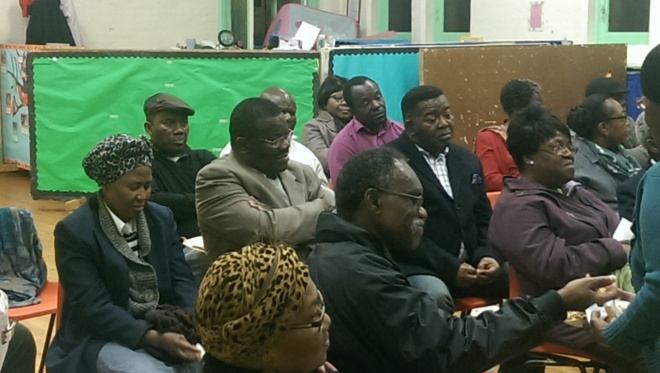 What happens to traditional rites?
What happens during confinement?
What is so special about the Black Stool?- Does the stool only represents  the history, unity, morality etc,  or signifies the past, the present and the future of the society only.
Adaptation–/Dialogue between the Ga culture and Christianity.
I believe that at all times; the Christian Gospel must engage the Ga culture.
As we look forward we should at all times take from the past, the fire and leave out the ashes?
Rites of passage may be Christianized; I believe that Ga Culture and Christianity can accommodate each other during outdooring ceremonies, puberty as in confirmation services, marriage and widowhood rites. Thankfully, the Church already has liturgies for Widowhood rites and naming ceremonies.
There can also be Christian input into festivals, eg ban on drumming may be a time for Christian fasting and prayers for the Community, a special service may be held in the church to kick start the festival celebration. Interestingly no libation is poured during the ban on drumming among the Ga people because the jemanwoji (gods of nature) and ancestors are assumed to be ‘already in town’. The Church can make good use of the time.

Form includes, pouring out of water or drink, closing of the eyes and holding hands together, prostrating, Muslim prayer form, and Jewish prayer form of standing by the Wailing Wall and repetitively moving the head up and down. Any form may be acceptable.
The point of sharp difference is normally in the words. We are called to bless not curse; to pray for the repentance of the sinner not for his death. It is unacceptable to Christianity that in the Ga traditional prayer the supposed enemy is cursed.
But I have a bigger challenge which is very controversial: Is it possible to pour out water libation whilst verbalizing a Christian prayer? Is the Ghanaian Church ready for these adaptations?

Use of the Ga Language
The Ga language has been helpful for both the Ga Culture and for Christianity.

How to present the gospel story to indigenous primal Ga
The Concept of Nyomno as God, the Supreme Being
‘Hell’ was a Canaanite God, which the Israelites somehow corrupted to mean a place for the wicked dead, as against Heaven. In the same way the concept of God was already with the Ga before the missionaries arrived. Some have suggested that the pre-Christian notion of Nyonmo was not that of a Supreme Being but one of Jenmawon.. Nyogmo was on the lips of the Ga people long before the arrival of the missionary, eg. you have divinities known as: Nyonmo tsawe (rain god in La); Nyonmo Tsaanaa (sea god in Teshie) and Nyonmo tsa (god of thunder and lightning in Ga Mashie).
It has been suggested, debatably, that in the order of things, Nyonmo was not originally on top of the pecking order. Somehow, the Ga have now equated this Nyonmo with God and given it a new meaning. (ref. M. Field, p 14)
Tswa tswa tswa Manye aba
Wogbei kome?
Nii Sakumo edzor (still in existence as supreme)
Akpititiokor edzor(extinct)
Otsiamah edzor(extinct)
Awudu Sakaraka edzor( of little significance today)
Ataa Nyonmo edzor (now developed into the Supreme Being)
Tswa tswa tswa. Manye Aba.
The further suggestion is that the title of Nii Sakumo suggests superiority. Sakumo in both Tema and Accra is considered a war deity (also known as shitse, owner of the land); whilst Ataa stands for father.
Furthermore, the reference of rain to Nyonmo is not semantics, it is intentional. It is to demonstrate how the concept of rain, thunder (Nyonmo shimo), lighting (Nyonmo kplemo) relates directly to Nyonmo.
Of great help to the development of the Nyonmo as a Supreme Being is that He does not have a shrine, priest or altars and is not associated with any one place or location. He dwells permanently in heaven. He only reveals himself to people and nurtures them by sending rain. Over time these understandings may have catapulted Nyonmo to be Supreme Being, higher than any other deity.
The Concept of Sin
Recognition of sin and cleansing is both Christian and among the Ga (aadwra as in Odwira) The use of blood is in tune with the Bible: ‘without the shedding of Blood there is no remission of sin.’ Among the Ga this is done especially

The meat in the meal stands for the sacrificial animal.
The man gives the money for the meal just as among Christians God gave his son whose blood saves us the offending party.
Understanding the Virgin Birth/ Incarnation
Among the Ga, there is the belief that ‘jemanwonjii’ can give children; or can conceive with a woman and give birth to a child. We have ‘won bi’, ‘Nyogmo bi’ etc. Lakpaa is known as Nyonmo-bi-Tettey. The Sakumo is also known similarly. The Ga is able to replace Jesus with Sakumo or La-Kpaa as nyonmo bi thus it should be easier for the Ga to accept and understand the virgin birth, Jesus as God’s son born to save us from our sins.
Chaplaincy
Long before the advent of the missionaries, we have had traditional Chaplaincy. Eg. Okomfo Anokye and Osei Tutu 1
We also have the Nai Wulomo, Gborbu Wulomo and Sakumo wulomo and their relationship with the Ga Mantse and other Chiefs. We have also heard of the close relationship between Nene Odonkor Azu of Manya Krobo and Zimmermann, the missionary.

One has to be Careful: eg. Prof. Dzobo’s and ‘Melagbe’ theology which caused  schisms of the E.P. church. However the success story of Vatican 2 and Archbishop Sarpong‘s attempt at indigenizing the Catholic Church in Ghana should be our guide. All said and done the process of adaptation and indigenization should be like the Peeling of onions-Gentle and gradual. Full or Complete indigenization and adaptation may out live all of us.
The Salem Concept: The early Missionary approach o making Christians was not helpful since it created an identity crisis for Ga Christians. The Missionaries uprooted the early converts from their families and communities and planted them in Salems. This approach isolated the converts and led them to demonize their own heritage. For example, Ga Christians were not encouraged to celebrate Homowo and those who did were disciplined. Eventually, it became difficult for them to identify with their own culture. John Mbiti has  rightly said that the African man cannot be saved alone as an individual; he must be saved with the community.
Conclusion
If we are to worship God as Ga Christians without any struggle of anxiety, we must evolve a Ga Christian theology which must come out of the people’s experience (past and present and world view.
Who do Ga say that Jesus is?

Learning Insight: A change in funders’ attitude towards BAME organisations?

Ade Sawyerr Management consultant, community activist, cultural enthusiast and social, economic and political commentator in search of community integration in Britain and African development. Ade can be contacted at equinoxconsulting.net or adesawyerr@gmail.com.
SIGN UP

The Matters Arising blog is a collection of thought-provoking, thought-leadership pieces sprinkled with some blue-sky thinking on pertinent issues affecting African communities both in the diaspora and at home. It includes articles on culture, politics, social and economic advancement, diversity and inclusion, community cohesion topics. It is also a repository of the political history of Ghana, traditions of the Gadagme people of Ghana, and the Pan-African politics of Kwame Nkrumah. Read, enjoy, like, share, and join!